On this page you will find a selection of Novelty Radios.

Many of these will be transistor radios in plastic cabinets. I don't have many of these so don't be surprised if the images are few. One novelty radio that came out in the 50's was one that looked like the old crank style telephone with a removable ear piece and a mouth piece mounted to the cabinet. One of these that I gave to my son-in-law used the bells as the volume control and the tuning control. Other novelty radios had famous icons as part of their motif, such as the Hopalong Cassidy radio, or the Dick Tracy radio, not to mention about a zillion forms of a Mickey Mouse Radio. 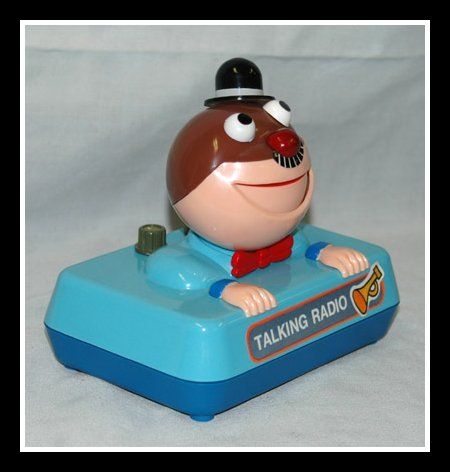 This is the Talking Radio.

This cute little transistor radio was recently given to me by a friend, you know who you are.

The way it works is when you tune a station the mouth starts moving, somewhat synchronized to the audio voice.

The on/off+Volume and the tuning knobs are on the back of the talking head. I assume there is some kind of filter that selects voice in a certain frequency range and then amplifies that to drive the mouth. This is not real high-tech. The mouth opens and closes, but it is not very synchronous with the audio....but still cute. 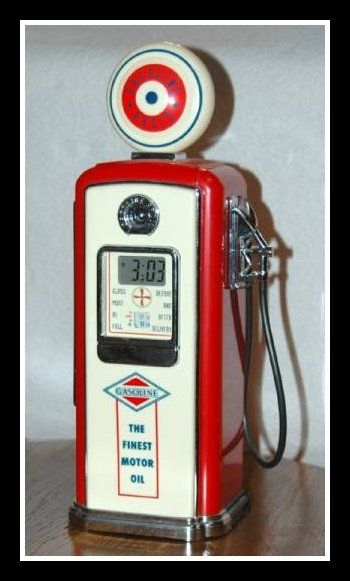 This is a radio designed to look like an old time gas pump. It was made by Polyconcepts USA and is model 541-908.

They packed a lot into this small package. Not only is it an AM/FM radio but it also has an alarm clock built in. You can see the LCD clock readout on the front of the pump where the amount pumped would show in a real pump.

The tuning dial is in the lower half of the meter box where you would normally find the price per gallon displayed.

I bought this radio because I thought it went well with my model car collection, but it is much too big to fit in properly.

You might think that the hose is the antenna, but it is not. They have a small wire coming out the back of the pump which is designed to be spread out over a surface. There is even a jack on the back to accept a wall power source.

As novelty radios go, this one is very nice. 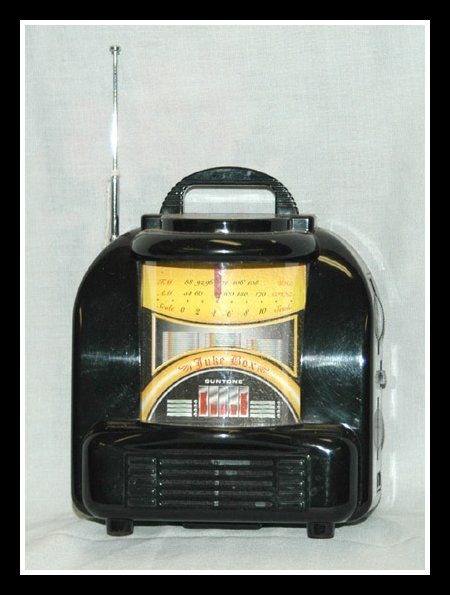 This is a mini Juke Box radio that I picked up at the IHRS meet in Kokomo, IN.

The radio is AM/FM and it is pretty simple with just the volume-on/off knob and a tuning knob, plus a switch to select AM or FM.

It does have a nice telescoping antenna and a handle that allows you to pick it up to carry to your favorite malt shop. 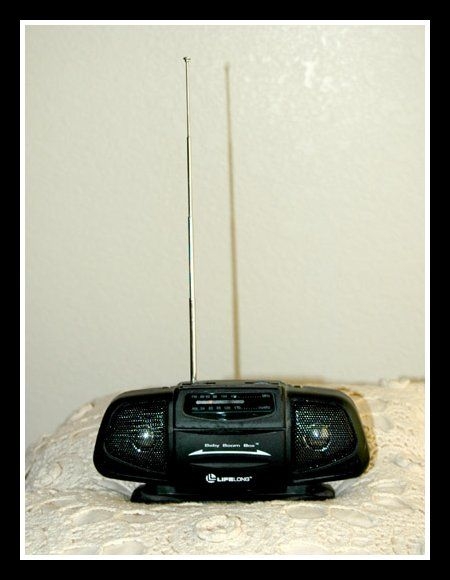 This is a Baby Boom Box manufactured by Lifelong, model 2225.

These radios were popular "give aways" by stores such as Montgomery Wards and others. We probably have had a dozen of these over the years but we finally managed to hang on to one of them. The others were all given away to grand kids to use as toys, but then we realized the historical value of these give-away radios.

This is an AM/FM model with telescoping antenna and slide rule dial. The volume-on/off and tuning dials are on the top front of the radio and the band switch is on the back. This radio is just a little over 7 inches long. 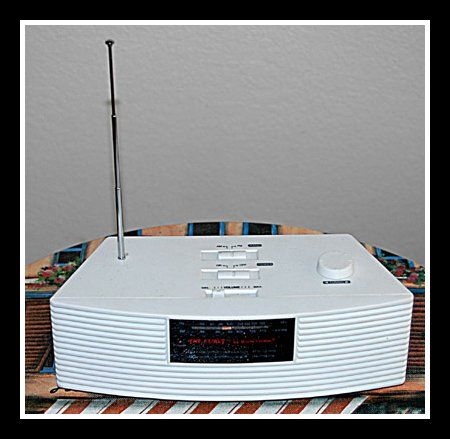 This is a clone of a Bose radio and it is just about 8 inches across. The label reads "The Curve, by Suntone, Model RR9900

This was one of those EXPENSIVE garage sale purchases....cost $1.00.

It looks like a lot of controls on the top of the radio but the back one switches from AM to FM. The middle one is an on/off switch. and the front one is the volume control. The tuning is the knob to the right. 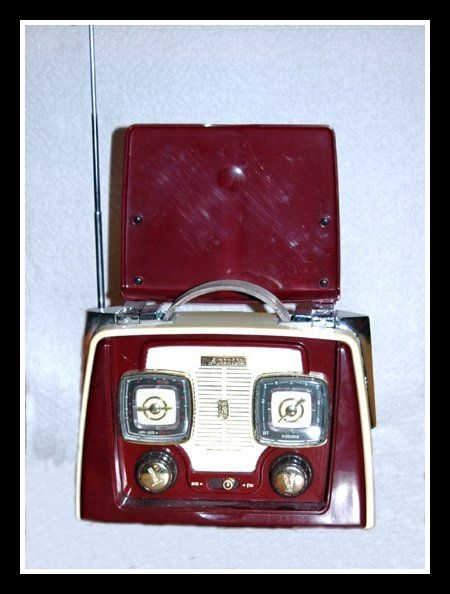 This is the Spirit Trans-Atlantic radio made by Polyconcepts USA and is model 541-529.

This is a neat radio with a leather carrying handle and a front closing lid. It is AM/FM and has the tuning and volume controls on the front and the on/off switch is on the back. This one also has a DC power jack for a 6 volt wall supply. 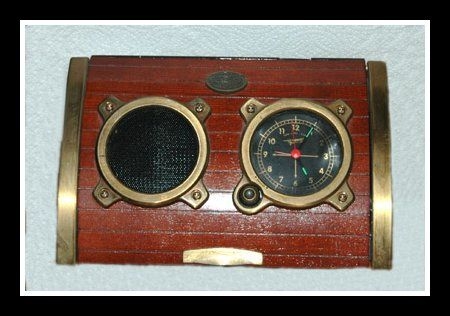 This radio is called The Spirit of St. Louis and was made by Polyconcepts USA, model 542-265.

They did a great job of making the lid look like real wood and I love the antique brass accents.

This is a clock radio, but unlike a lot of these, this one has an analog clock in it.

The radio is AM/FM/CLOCK/ALARM, so it has a lot of stuff! 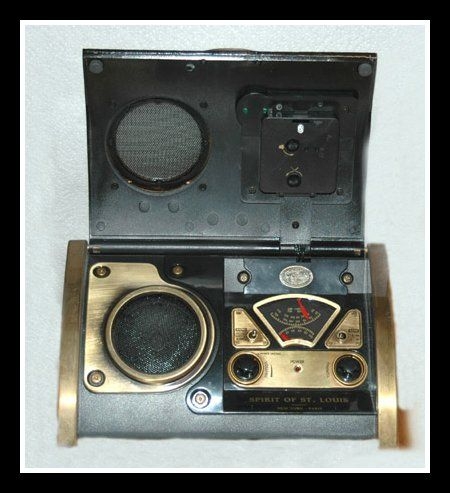 Here is the radio with its cover open.

Notice that there is a speaker grill cloth so you can listen to the radio with the cover closed.

There are tuning and volume indicators that look like aircraft instruments. Again they use the antique brass accents under the cover.

You can just barely read the name at the bottom where it says SPIRIT OF ST. LOUIS and under that it says NEW YORK - PARIS. 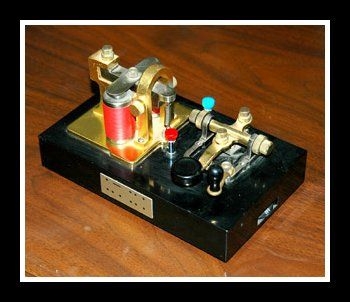 This is a novelty telegraph key and sounder (KOB) radio. Japan, WACO-611

I can read the American morse code characters on the front face of the radio, but I don't understand it. It says ACCC in American Morse.....what the heck does that mean?

The device can be used to send morse code as well as performing as a standard AM broadcast radio.

The sounder looks very authentic, even made of metal, but there are no external wires going to the binding posts adjacent to the sounder. At this time I don't know if the sounder is supposed to actuate or not.

Being an ex-railway telegrapher, I have several of the real things in my collection of telegraph instruments. 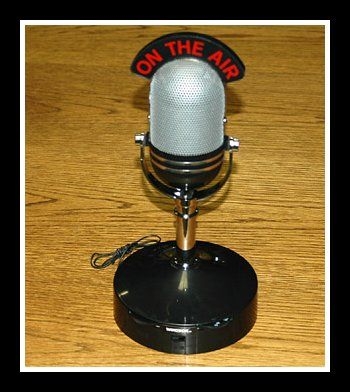 AN AUTHENTIC LOOKING BROADCAST MICROPHONE THAT IS AN AM/FM RADIO.

This transistor radio is reminiscent of the old style broadcast microphones. It is a 2-band radio with both AM and FM. The "On-The-Air" sign lights up when it is turned on, so that is real cool looking.

THIS IS A VERY INTERESTING WRISTWATCH NOVELTY RADIO. I don't have a date or manufacturer for this item, but I would guess that it is from the 60's.

The wristwatch is HUGE and I have included the Lafayette KT-320 radio at the bottom just so you can guage the size of this thing.

The watch is made in very authentic detail. Each band is mounted to a removable pin. The band is made out of leather and is stitched along the sides just like the real thing.

The radio is AM only and operates on a 9 volt battery. I would guess the entire length is around 3 feet from buckle to the tip of the end of the other band.

The radio plays and I get about 3 stations, but not real loud. I suspect a better antenna would make a world of difference in the reception. 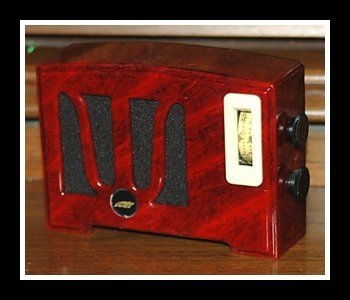 This is a plastic novelty radio styled to look like a radio from the 1940's period.

Like most novelty radios, this is transistorized and has AM and FM bands. The manufacturer's name is given as Xonex of Cleveland, OH, but the box indicates it is made in Hong Kong.

I have been told that this radio was "designed after a catalin plastic radio of 1939 made by RCA". 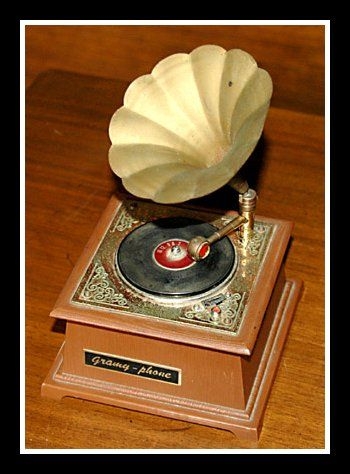 This is a cute novelty radio styled to look like a grammaphone of old.

There is an On/Off/Volume control on the right side and the record platter turns to allow tuning different stations. This one is AM only, no FM, so it might be a little older then some of the novelty radios. It is labeled Gramy-Phone and the bottom indicates it is made in Japan, but there is no manufacturer or model number shown. 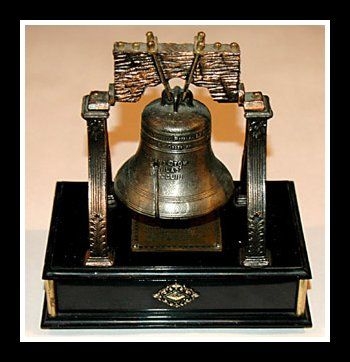 This is a replica of the Liberty Bell (complete with crack) in Philadelphia's Independence Hall. The radio is AM only and has the on/off/volume control on the left side and the station tuning on the right.

The plaque under the bell reads "The crown of this bell in Independence Hall, Philadelphis bears the inscription of "PROCLAIM LIBERTY THROUGHOUT ALL THE LAND UNTO ALL THE INHABITANTS THEREOF". This cracked in 1835 when tolling the death of Chief Justice Marshall. 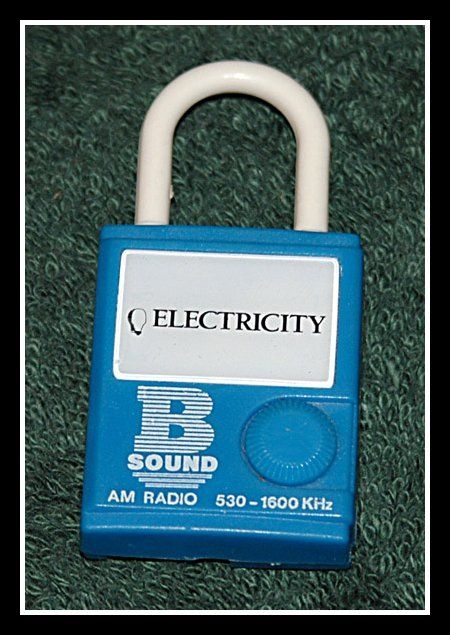 The radio is powered from something like a watch battery and you have to plug in an earphone to be able to hear it, but it works great.

This radio was donated to the museum by a ham friend who wishes to remain annanomous. So thanks 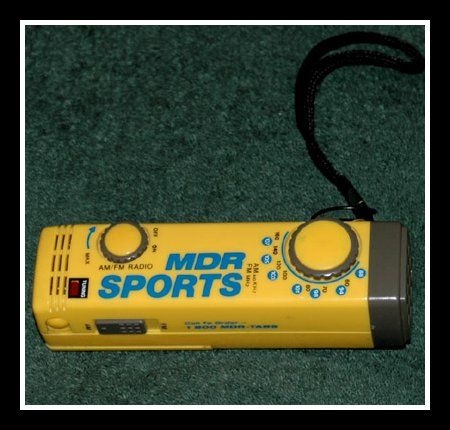 This is a neat novelty transistor radio that looks something like a flashlight.

As you can see it is both AM and FM and the end that looks like it would be a flashlight is actually the speaker. The radio works very well.

This is another donation from that "you-know-who" ham friend. Thanks! 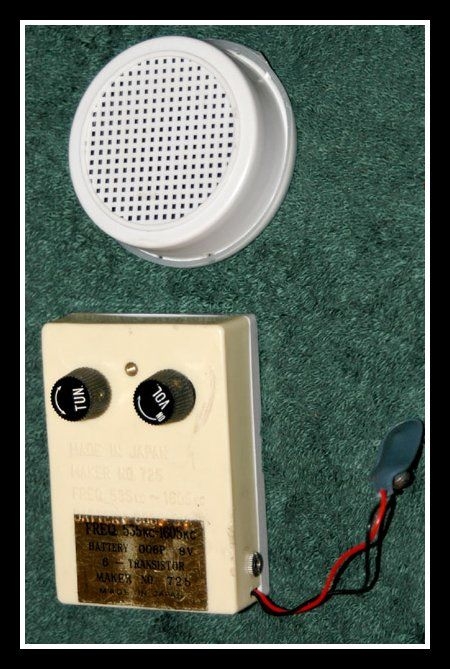 This is an interesting two piece transistor radio. It has the speaker and the 9 volt battery separate from the main chassis.

I wonder if this was some sort of kit radio that you could build into another box of some sort. I have never seen such a radio where there is not room for the battery inside the main cabinet.

You can see that the control knobs are labeled TUN and VOL but that is about all there is to it.

This is another donation from that "you-know-who" ham friend....thanks again. Now tell me more!

I have learned that this probably came from a stuffed animal, like a Teddy Bear.

Novelty 7-UP can radio

This is a novelty 7-UP can radio still with it's original box.

This radio plays AM only and it works fine. I could not find a model number so have not been able to establish a date for this. Of course, this is a transistor radio.

This is two sets of Novelty Football Radios.

These radios both work and have fantastic sound. It is really surprising how good the sound is....almost like a tube set. Of course all these novelty radios are made using transistors, not tubes.

This radio is the same size and shape of a Polaroid-600 Film Pack.

I have three of these and, surprisingly, they all work. The unique thing about these film pack radios is that they would run off of the actual battery that came with the film pack. i. e. the batteries were interchangeable between the film pack and this radio. 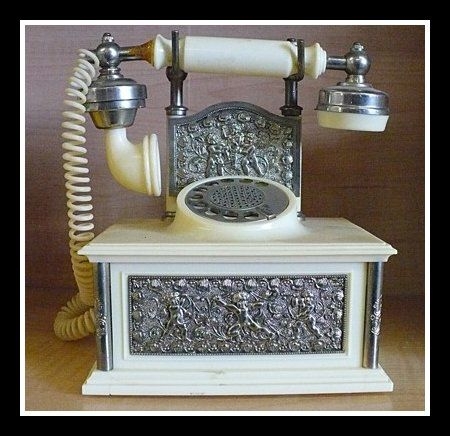 I have zero info on this radio, so if you know something about it then I would appreciate hearing from you via email. 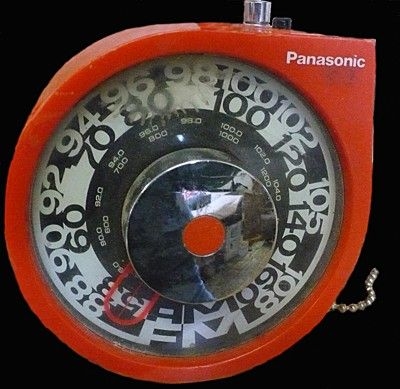 This Panasonic radio has both AM and FM bands in this nice "space age" looking design.

The radio has a telescopic antenna for the FM signals and a neat LARGE numbered dial face. 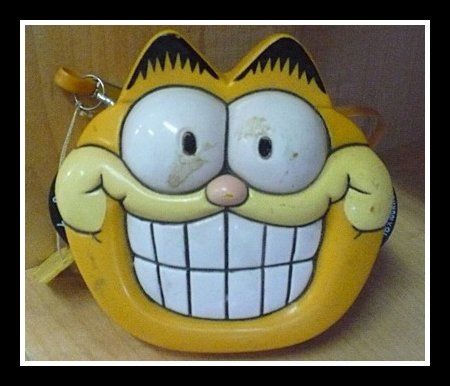 This poor thing is a little dirty but ain't it cute?

It has a carrying strap and who could resist that smiling face. The smudges on the eyes was some kind of sticky stuff that didn't come off with the usual cleaning agents so I will have to try goo-off or some such stuff. 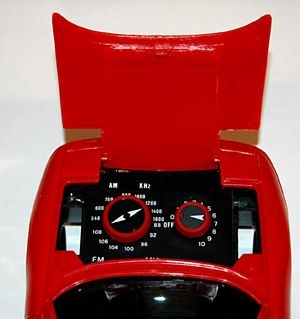 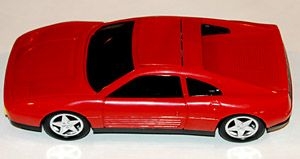 The controls are under the hood as seen on the right. The batteries are stowed under the rear deck. The clock is in the sun roof when you raise up the roof the clock faces forward. 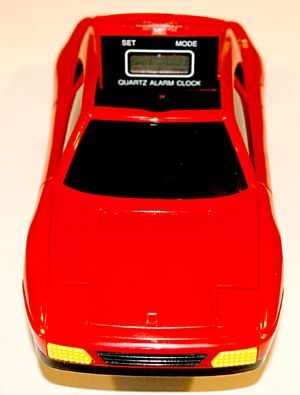