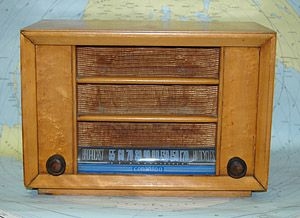 I would not have used a blue dial face on this radio, but it works very well with this color wood. A nice thing about this radio is that it has REAL WOOD knobs. 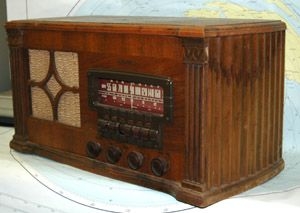 This is a very heavy Firestone Air Chief, model 4-A-21-X.

I love the fluted end panels on this radio and the overall inviting look. There is just something about the design that just yells at you to come and listen to it.

The rear of the radio says FM and Phono. Not sure what the FM was for unless there was an optional FM tuner (converter) you could plug into the set. The set has both the broadcast band plus a shortwave band. 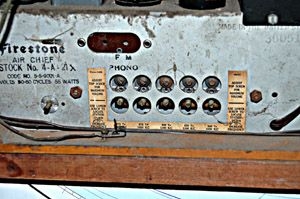 It is a little hard to see, but just above the word "PHONO" it says "FM".

The group of adjustments on the bottom are for the push buttons on the front. The instructions says to adjust the bottom slug to select the station and then adjust the top slug to obtain maximum volume.

I found that they made FM converters you could use on AM radios. See an example at http://www.pilotuner.com/ that you could connect to an AM radio and listen to FM. 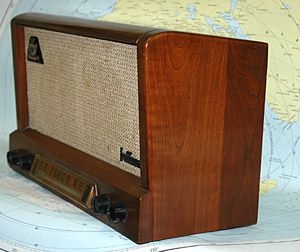 Here is another Hoffman radio with a nice wooden cabinet.

I could not find a model number on this radio, but the am dial has the Civil Defense logos on it at the 640/1240 kc positions. I think that would make the radio from the 60's in that case.

A visitor just left this info from an identical radio he has " Model BW601 (this was hand written (most likely from the factory when it was inspected) in a little outlined rectangle area on the schematic label, which is located on the bottom of the wooden case.) Chassis 1103"

The Hoffman radio company started in 1941 and still exist today as Hoffman Video. You can see the time line of the company history at this site: http://www.hoffmanvideo.com/aboutus.asp 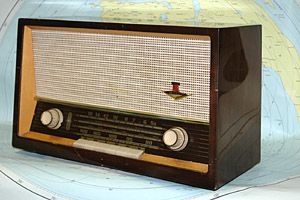 The only model information on this German radio is ELECTRA "C"

The Nordmende is a radio made in West Germany and it has a very stylish cabinet. The radio has 4 bands including BC, SW1 SW2 and FM.

This is the only German radio in my collection. 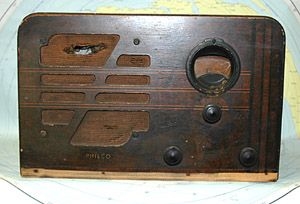 This radio is somewhat of a basket case but I include it just so you can see the change in style from the late 30's to the early 40's.

This radio is from 1937, but in its present state you might guess 1907. However, rough as it is, there is enough of the radio present that it can be fully restored. The chassis is complete, but there are several pieces of wood missing from the cabinet.

Having a wood working shop in the same building as the radio shop is a real plus in these cases. 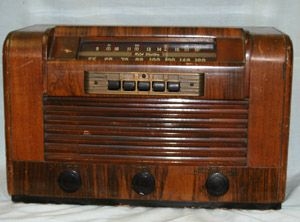 Note the styling is vastly different from the Philco above from 1937.

This radio has both AM and FM bands. Now the really interesting thing about this radio is that it was manufactured in Jackson, Michigan, my birth city!

The radio was made by Sparks Withington, Co. 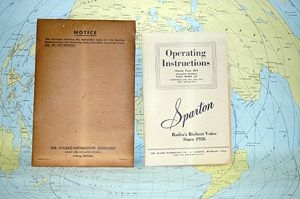 I was surprised to find an original Operating Instruction manual tucked away in the back of the radio.

The manual itself is in very good condition, but the envelope that it came in on the left is pretty brittle. 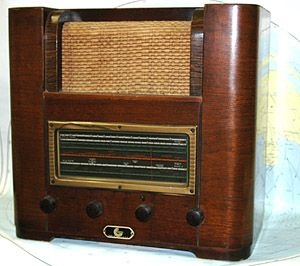 There are some strange cities labled on the Shortwave band. One is Szekesfehervar, which I am told is a city in Hungary. It also has Saigon, Daventry, Rabat, Huizen, Monte Grande and Bandoeng as the more unusual cities not normally found on a shortwave radio. It includes the more common cities of Tokyo Sydney, Geneva and Buenos Aires, but missing are cities such as London, Paris, Moscow, Berlin, etc. It is a very strange shortwave collection of cities, so one must wonder what market this radio was made for.

I was finally able to ID this set with the help of fellow CHRS member, Norm Leal....thanks Norm. 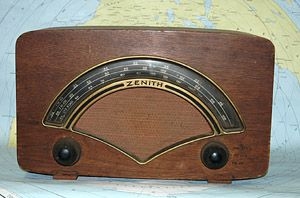 Ok, here is something special, a Zenith model 8H034 from 1946 with BOTH the old and the new FM bands!

The radio also has the standard broadcast AM band. 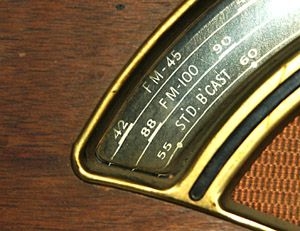 This is a closeup of the dial showing the FM-45 band and the FM-100 band as well as standard broadcast AM band. 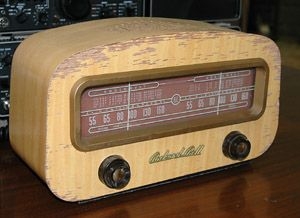 Examples of the Southwest stations are KSFO, KLAC, KXLA and KGR

Examples of the Northwest stations are KPO, KGW, KOA and KHUM

I can imagine the announcer on KHUM saying that if you hear a HUM on your radio then leave the dial right where it is because you are listening to radio station K.H.U.M. where the signal is really humming.

The radio is a little weather beaten and in need of a good refinish. While the material appears to be wood it is actually made of something like a thin layer of masonite. This is evident in a place where some material is missing on the upper right rear section (can't be seen in photo). So repairing that section may be a challenge.

NOTE:    I just got some feedback from AA6DX that radio station KHUM was located in Eureka, CA, in HUMboldt County. In 1951 Eureka must have been a pretty small town, so getting it's local station on the dial of this radio was an accomplishment. Mark says that the call letters moved to "Santa Rosa, then off to the Midwest, and finally back to Eureka". Today the call letters are for a Rock-N-Roll FM Station. The original transmitter known as KHUM is now known as KINS. Thanks for the input Mark. 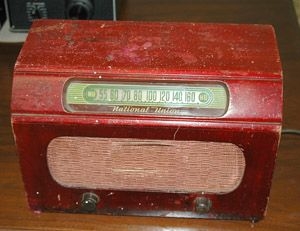 This is the first "National Union" brand radio I ever came across so I consider it quite a find. The dial has the NU logo on each end of the dial.

Although the radio looks pretty rough it plays really nice. I haven't decided if the finish is paint or stain because it appears to want to "peal" off. In any case it will require refinishing and a new speaker grill cloth.

I heard something rattling around inside the radio and when I opened the back I found a wasps nest. Happily, the wasps were long gone. So the radio works fine now that I got the bugs out of it......ouch!


Click HERE for a great write-up about this company and how it came into existence. 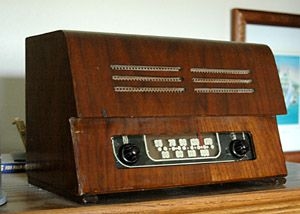 I just found out that this is a Teletone radio from 1946.

If the reverse painted dial face looks a little fuzzy it is because it is a little fuzzy. Also notice that the sliderule dial is not centered in the opening in the wood from top to bottom. The front panel slopes backwards and, because of this, the chassis is mounted on an angle.

When I bought this radio, it had a sign on it that read "Ugly, but Plays" and it does play well after a little warmup drift.

At first I thought this was a KIT radio because of the crudeness of design but now I have seen several others like it (I have two) with various cabinets so I guess it was just a simple design by Teletone.